Jeters to build Near Family Cemetery In Santuck

SANTUCK - Just as the Jeters of Suffolk County, England, were memorialized with markers in the floor of the chapel of St. Margaret's Church, the Jeters who trace their roots to Union County will be memorialized in a new chapel to be built in their family cemetery.

Ground-breaking for the new chapel, to be constructed in the Jeter Family Cemetery in Santuck, was held Sunday, with the two oldest family members in Union County, Col. John Jeter and retired educator Paul Jeter, both more than 90 years old, using the spades. The ground-breaking followed the annual Jeter family reunion, which draws relatives from many areas and has been held in Union annually for more than 50 years. 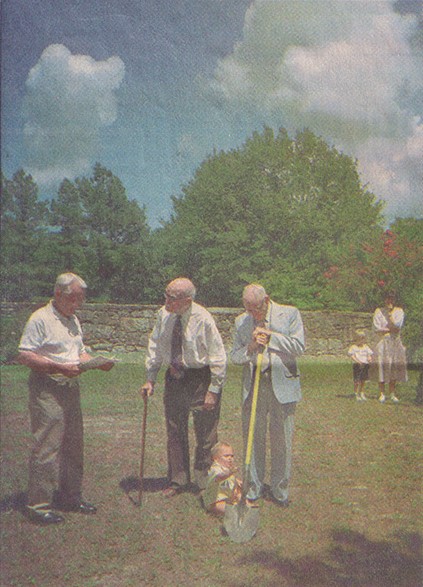 Dr. Allen Jeter of Mt. Pleasant, Col. John Jeter and Paul Jeter, both of Union, and Col. Jeter's great-grandson, Will Hammond, Participate in groundbreaking ceremonies Sunday for a chapel at the family's cemetery in Santuck.

According to Dr. Allen Jeter of Mt. Pleasant, a retired family practitioner who traces his roots to union County, 12 generations of Jeters lived in Lowestoft in Suffolk County, England, and worshiped at St. Margaret's Church throughout the 1600s. many were buried in the aisles at St. Margaret's under 3 feet by 6 feet marble slabs. The names of the grave occupants were engraved in brass inlaid in the marble. On June 22, 1644, Oliver Cromwell's soldiers removed all of the Jeter brass markers and sold them. Lowestoft historians recorded that the brass was cast into a bell in 1644 which hangs today in City hall and continues to toll the hour of 8 p.m. daily.

Dr. Jeter, who has been to England and has seen the church in Lowestoft where the Jeters were buried, spearheaded the construction of the family chapel in Union County and has been working on the project for five years, calling for destinations from family members. Construction should be completed in time for next year's family reunion.

"We usually have around 125 family members attend the reunion," said Russell "Bud" Jeter of Union. "For some it is the first time, some come every few years and others come every year. All my sons and their children are here." A Citadel graduate and retired banker, Bud Jeter is the great-great-grandson of James Jeter, the first Jeter to settle in the Santuck-Carlisle area, and the ancestor to whom the Jeters in Union County trace themselves. A Revolutionary War soldier who fought in the battle of Ninety Six, James and his wife, Mary Crosby Jeter, are among those buried in the Jeter Family Cemetery.

Several generations of Jeters are buried in the 20-acre family cemetery off Highway 215. Family members, including David Sims Jeter, Hugh Jeter, Bud Jeter and John R. Jeter Sr., have donated land to the cemetery. The chapel will be constructed o the most recently donated section of land, which was given in 1986.

A brick floor will pave the altar area and aisles. The brick in the main aisle will be engraved with the names of living and deceased family members. "This is a sort of a takeoff on the chapel in Lowestoft, England," said Dr. Allen Jeter. "I just looked at the situation and felt like my family had been in the area for many years. They are a group of people who have held themselves high. We have produced four South Carolina state senators, two lieutenant governors and one governor, and some of our ancestors have died in the wars our country has been involved in. many have pursued careers in the military, some in the ministry, others in the legal and medical professions. Still others have prospered in the fields of business, agriculture and education. I'm very proud of the heritage my family has left me, and it for the reason I feel we owe them something. We owe them much more than we can repay them."